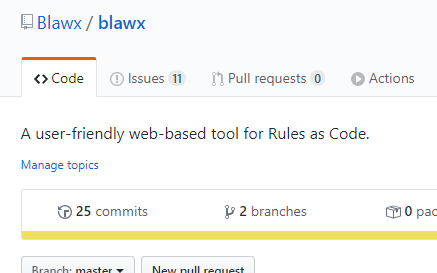 You can access the open source version of Blawx (which is almost identical to the live alpha version at the time of writing), at GitHub.

Two reasons. First, Blawx has a lot of potential as a tool to help spread the Rules as Code movement. But the technologies you use to implement Rules as Code in the public sector need to be open source to provide guarantees of transparency and accountability. It was important to release an open source version of Blawx as soon as possible so that it can be as big a part of that global conversation as possible.

The second reason for releasing the open source version is to do with who. So far, Blawx has been a project by me. That’s not good enough. Continuing to develop in the open allows other people to contribute their wisdom and expertise, and gives us(!) the opportunity to make Blawx better, faster.

If you are an experienced developer or a beginner who would like to get their hands dirty, head over to the repository at GitHub. I’d love to have you involved.